Sports action in crypto is fresh off the heels of a dynamic Super Bowl weekend last week, but things aren’t slowing down one bit. Red Bull Racing has secured another massive deal, there’s a new DAO on the market that wants to purchase a major league team, and the NFL is making a lobbying push to support crypto with top federal agencies.

This was all in the past week! It’s just another weekly dose of The Sports Slice. Let’s dive in.

We’ve seen a few different crypto-related team buyout explorations over the past year or so. LinksDAO, for example, has a roadmap that outlines mid to late 2022 as the timeline to purchase a golf course. WAGMI United is a name that has popped up in the Sports Slice in recent months as a DAO that has explored purchasing a football club – with limited success thus far.

The latest endeavor is “Buy the Broncos,” a DAO that is reportedly aiming to raise $4B to purchase the NFL team. In a statement to CNBC, the DAO’s creator Sean O’Brien told the network:

“We know it sounds a bit crazy, but it’s also a bit badass. The purpose essentially is to establish an infrastructure so that fans from all walks of life can be owners of the Denver Broncos.”

Following a deal with Tezos last year, Red Bull Racing is coming back for more in 2022, signing a new deal with cryptocurrency exchange Bybit in what is being described as “the largest annual crypto deal in international sport so far.”

Deal terms have not been disclosed, so the statement is still in question, but according to sources the deal is reportedly a three-year, $150M partnership that secures Bybit as a “principal team partner” – one level below a “title partner” deal for the brand.

Jimmy Butler has been leading the charge for the Miami Heat this season, positioning the team as one of the top contenders in the eastern conference this year. Butler did a co-branded giveaway with Binance last weekend, giving away 2,222 NFTs during the Super Bowl. Butler also sat down with Financial World to discuss crypto in recent weeks, stating that in the NBA, “everybody is starting to learn about crypto, or wine.” Not a bad combo.

Is crypto for you? DO YOUR OWN RESEARCH, trust yourself. ⁰⁰I’m giving away 2222 NFTs of me during the game today 🏈 with @Binance. When a big name tries to sell you crypto, sound the #CyptoCelebAlert buzzer🚨. #ad
⁰Learn more➡️https://t.co/zh3cpqeYF7 pic.twitter.com/fzBdSUGCfW

F1 deals are becoming increasingly prevalent in our Sports Slice reports each week, and now all but only two F1 teams have crypto-related deals, according to a recent report from SportsPro. Even the league at large has a deal with Crypto.com.

This week, the latest move emerged as Binance secured their first-ever F1 deal with Alpine. NFTs will be the initial move for the two parties. Alpine chief executive Laurent Rossi stated that “partnering with Binance fuels our passion to change the racing landscape as well as open doors for more innovative fan engagement. This journey starts with the Alpine token launch and the unveiling of a special collection of NFTs.”

Related Reading | NFTs In A Nutshell: A Weekly Review 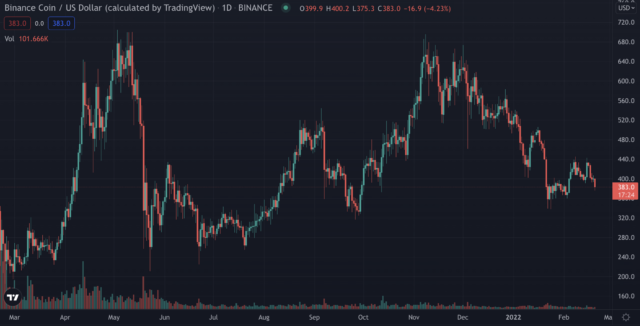 The NFL Is Lobbying The SEC On Crypto

A new report emerged from the good folks over at Front Office Sports this week, revealing that the NFL has spent over half a million dollars on lobbying both houses of Congress as well as the SEC on “issues related to blockchain technology.”

The NFL has also lobbied the White House, Department of Justice, and other top level agencies around matters including sports betting, and the league is reportedly “seeking to determine if cryptocurrency can become a key part of the NFL’s business.”

Last weekend’s Super Bowl was riddled with cryptocurrency advertisements, including the arguable gameday winner in Coinbase’s bouncing QR code, which crashed the exchange’s website for a short period of time.

Houston Rockets young talent Jalen Green is one of the bright young stars of the NBA. Despite an early exit in this weekend’s Dunk Contest during the NBA’s All-Star weekend, Green has a bright future ahead is an exceptional talent – albeit on a struggling Rockets squad.

This week, Green announced that he is partnering with Coinbase – the second athlete to do so behind Kevin Durant – after the crypto exchange secured a league-wide deal with the NBA late last year. Coinbase has described Green as a “modern-day renaissance athlete.” Education and NFTs are the initial focal points for the two partners.