Spanish football club FC Barcelona is one of the biggest names in global sport. And Barca is no stranger to playing in crypto, either. Earlier this year, for example, we covered the club’s exploration with Polkadot as a potential jersey sponsor. While streaming audio service Spotify closed the deal with the club, the fact that major players like Polkadot (as well as Binance, in this case) are in the conversation with the biggest clubs in sport is bullish for crypto engagement at large.

Let’s take a look at the latest from FC Barcelona on the blockchain front, and what we can expect from the club moving forward.

The latest news to hit the wire this week is that the Barcelona club, one of the most recognizable names in sport, is looking at several different blockchain-based opportunities, including a “Barca metaverse,” NFTs, and even their own cryptocurrency.

Club president Joan Laporta spoke at the Mobile World Congress 2022 and stated that the club would like to create their own cryptocurrency to “survive financially.” They would be the first major sports club to issue their own dedicated crypto token. Laporta elaborated in saying:

“We want to create our own cryptocurrency, and we have to do that ourselves. We are different because we survive financially from what we can generate through the industry of sport.”

Laporta went on to state that the club declined cryptocurrency firm offers around jersey partnerships because they are developing their own metaverse activation. Despite being a tall order, it seems abundantly clear that FC Barcelona’s top brass sees full ownership of metaverse engagement as paramount – which likely impacted the decision-making behind selecting Spotify over these potential crypto partners. 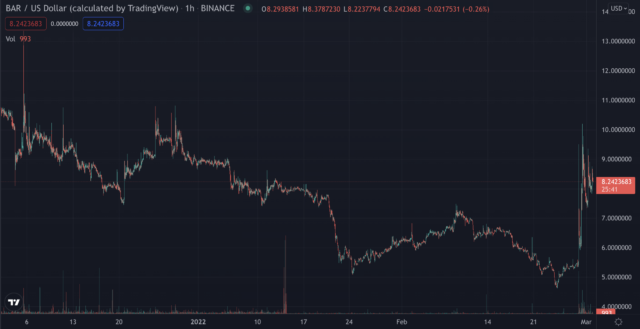 Beyond the aforementioned activity with Barcelona fielding offers from Binance and Polkadot around jersey sponsorship, the club’s engagement with crypto hasn’t been all sunshine and rainbows. The club had previously signed on with NFT marketplace Ownix, but withdrew from the deal after a few short weeks due to Ownix management ties with Moshe Hogeg, who was arrested on suspicions of crypto-related fraud.

Before all of this activity, FC Barcelona was one of the first clubs in sport to form their own fan token with Chiliz. Dozens of football clubs across the globe have followed suit.

Releasing a wholly-owned cryptocurrency and metaverse engagement will be a hefty ask with plenty of regulatory question marks to overcome. Stay tuned to Bitcoinist – as well as our weekly sports report each Sunday, The Sports Slice – for all the latest.