The Canadian rapper, singer, and actor Aubrey Drake Graham (better known as Drake) bet a little over $600,000 worth of bitcoin on the English soccer team Arsenal to beat Leeds United and on FC Barcelona to win “El Clasico” against Real Madrid.

Unfortunately for him, the club from the Spanish capital defeated its biggest rival 3-1 at its home stadium Santiago Bernabeu.

A few days ago, the renowned musician inked a deal with one of the most successful Spanish soccer teams – FC Barcelona. As part of the agreement, the latter put the logo of Drake’s record label – OVO Sound – on their jersey during the derby against Real Madrid on Sunday (October 16).

Prior to the match, the Canadian bet over $600,000 worth of bitcoin on the Catalan team to win Spain’s most anticipated soccer game. He also predicted that the London giant Arsenal will defeat Leeds United. Winning both bets would have given Drake a profit of a whopping $2.8 million.

❗️Drake has placed a massive bet of €617,467 on Arsenal and Barça to win today against Leeds and Real Madrid. If he wins the bet, he will earn €2.890 million. https://t.co/3RbpJmsHxL 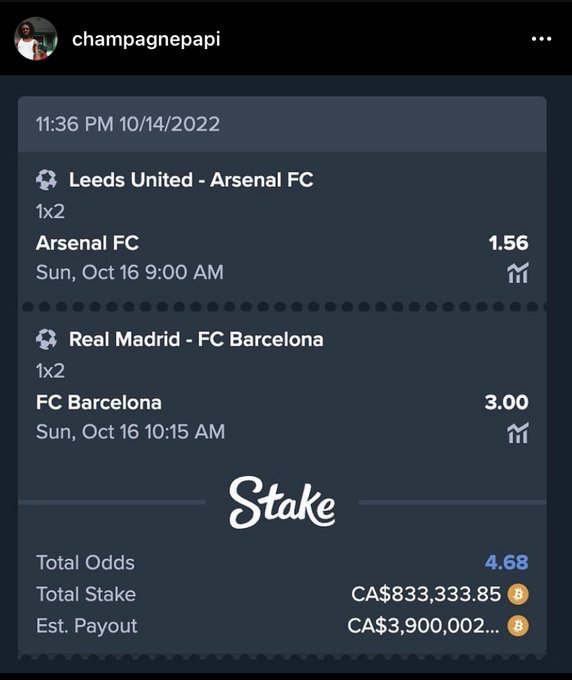 Over the past several months, the musician placed numerous BTC bets on sports events, and, unlucky for him, most of them did not bring him any profits.

Two months later, Drake placed a $234,000 worth of BTC bet on Ferrari’s driver Charles Leclerc to win the Spanish Grand Prix. However, the reigning F1 champion Max Verstappen seemed to have picked a better strategy and the more appropriate tires for the scorching temperatures in Barcelona and finished first.

All those unsuccessful bets brought bad fame to the Canadian rapper. Some noted he often brings misfortune to athletes or sports clubs after interacting with them.

In 2019, the French soccer player Paul Pogba became the first victim of the so-called “Drake curse” by posing for a photo with the musician. Days later, Manchester United (the club where Pogba played at the time) got beaten by the underdog Wolverhampton.

Later that year, Paris Saint-Germain’s defender Layvin Kurzawa took a picture with Drake. Shortly after, the team suffered one of its biggest defeats in the past decade, losing 5-1 to Lille.

The UFC fighter Connor McGregor also became a victim of the “curse,” losing his fight with Khabib Nurmagomedov after Drake supported the Irish during the weigh-in.

The post How Drake Lost $600K Worth of BTC Betting on Football appeared first on CryptoPotato.