Non-fungible tokens (NFTs) have exploded in popularity, and that has made investing in them all the more challenging. Here are 12 tips on how to spot the best NFT projects.

The space of non-fungible tokens (NFTs) has grown exponentially over the past year, and this produced quite a few consequences.

For once, there are thousands of NFT projects spawning every single day, and the entire space resembles a lot of what we’ve seen during previous hype cycles with initial coin offerings (ICOs), initial DEX offerings (IDOs), initial exchange offerings (IEOs), and whatnot.

The general consensus is that non-fungible tokens are here to stay and are going to play a pivotal role in sub-niches such as blockchain-based gaming that’s currently represented mostly by the play-to-earn model.

However, those of you who’ve dug a bit deeper into the NFT universe undoubtedly notice the increasing number of scam projects, or NFT creators who are here ‘only for the money,’ and how hard it’s becoming to pick an NFT collection that has the chance of becoming successful.

With this in mind, we’ve taken the opportunity to provide you with a few things that you should consider when choosing to ‘ape’ in a new collection and how to pick the better ones.

Over the past few years, we saw an exciting phenomenon came to prominence within the cryptocurrency community, and that’s anonymous founders. While considered a massive red flag in the past, this requires a bit more digging in the present.

Just because the team is anonymous doesn’t mean that you should dismiss their NFT collection. Remember – the Bored Ape Yacht Club was created by a completely anonymous teamand no one knew their identity for a long time before they were brought to light supposedly against their will. By the time this had happened, however, BAYC NFTs were at peak prices (floor price above $300K per ape), and no one had any doubts in the team.

In other words, instead of looking to verify the team’s identity – try to verify their accomplishments and credibility. Anonymous developers can still be very professional and dedicated. And public teams can also end up being scammers. Therefore, instead of blatantly making a call based on these criteria, try to research deeply and find out whether or not the team has merit behind it.

Another thing to consider is if they have any disclosed partnerships and collaborations. These can be partnerships with other companies or maybe with some well-known and well-received developers with proven track records.

If you ask anyone about why BAYC is so successful, they will probably say that one of the reasons is the community behind it. People resonate with the BAYC brand and are proudly wearing their Apes as profile pictures and on merchandise.

A community that’s doing its best to represent the collection and, even more – to push it further is something that you should definitely look for when choosing a project to invest in.

However, be aware that the NFT community is primarily in Discord, and there are many projects who tend to use bots to artificially inflate the community and make it appear as a vibrant one. Bots are easily spotted as long as you do proper research.

Be a part of it – observe how people behave and participate in conversations to assess their quality. A proper community attempts to add value instead of asking the blatant questions – “wen mint? Wen moon?”

Good projects tend to have considerate roadmaps. Although this might not always be the case, and it’s not to say that all good projects start off with a roadmap, but more often than not – they would.

You need to see how achievable the roadmap is and look for massive promises in ridiculously low timeframes. If you spot something of the kind, it might be a good idea to reconsider. Good projects grow steadily, and they do not rush deliveries – they prefer quality over quantity, and they don’t rely on every new code push to pump up their floor price.

Looking for artwork that’s unique used to be a good bet, but nowadays, that’s really not enough. It needs to be recognizable, albeit a derivative. For example, the Bored Ape Yacht Club launched another NFT collection and airdropped it to BAYC holders – the Mutant Ape Yacht Club. Although a derivative, it’s unique in that BAYC NFTs can also be subjected to the Mutant Serum and turned into mutants. MAYC, as it’s also referred to, turned out to be another hugely successful collection.

Art is subjective – not everyone perceives it the same. CryptoPunks might not seem like the best artwork, but for cypherpunks, coders, and builders – they might resonate. A perfectly well-drawn NFT with all the details might look like something very beautiful to you but might not be perceived well by the community.

Also, try to be in line with the trends – what can go viral?

Again – with NFTs, it’s not that important for the website to be a complicated string of features and perfect visuals.

However, it needs to show that the team put some thought in it and didn’t just blast it in a couple of hours to pull off yet another cash grab.

While not every meme-based NFT project is successful, fading memes is a mistake. It might not have sound economic logic behind it, but that’s what the crowd likes. Moreover, memes are now an integral part of the cryptocurrency market, and they can no longer be ignored.

It’s absolutely no coincidence that the most expensive NFT collection to date – the Bored Ape Yacht Club – represents apes. The term “let’s ape in” a certain cryptocurrency became hot during the DeFi summer in 2020, and it became one of the most popular memes in the community.

Another popular collection but on the Solana network – the Degenerate Ape Academy, has also established itself as a bluechip project in its ecosystem.

BAYC went viral because it was exclusive – to an extent. Not a lot of people knew that it was rolling out, which is the reason why it took about two days for the collection to be minted in full.

If there are tens of thousands of people battling to mint, chances are a lot of them are looking to flip it for a profit and re-list it immediately – this is the current reality, and it looks a lot like the IDO mania from last year – when people were battling to get on the whitelist, and then market dump the soonest they could.

Moreover, big companies are entering the NFT space – we already saw brands like Samsung, Adidas, Nike, and many more – take part in some shape or form. This means that, as time goes by, bluechip NFT collections will be those that had been well-funded from the get-go, making the barrier to success a lot higher.

What Blockchain They Are Built On?

The overwhelming majority of particularly successful NFT collections is built on Ethereum. It’s also no coincidence that out of all the top NFT marketplaces, those built on Ethereum have more volume.

Tip: We’ve created detailed guides on how to buy and sell and how to mint NFTs on OpenSea.

Far behind them lies Solana and others like the Binance Smart Chain, Avalanche, and so forth. Less popular networks tend to translate to less liquidity in the form of buyers and sellers. 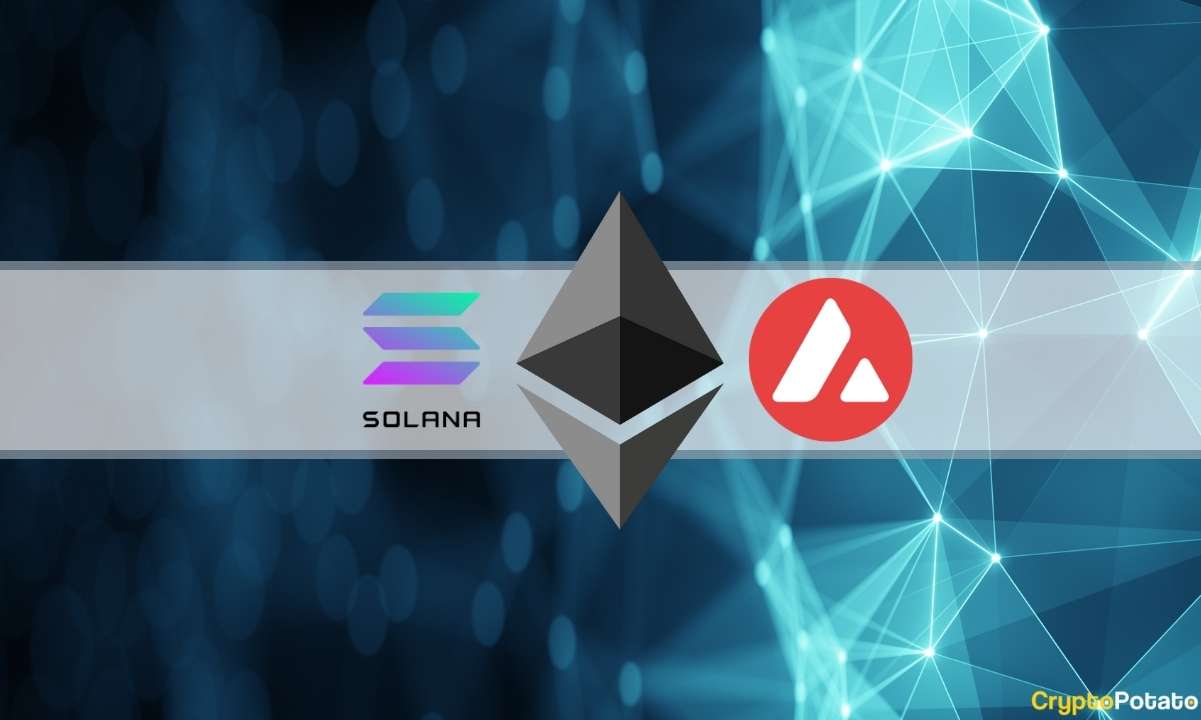 This should also be taken with a grain of salt because we’ve seen some crypto projects who were backed by celebrities to turn out complete scams. In January 2022, the most recent example came from a project called Ethereum Max that was promoted by top-ranked celebs such as Kim Kardashian and Floyd Mayweather – both of whom are sued for their involvement.

However, the opposite is also true, to some extent. The Borde Ape Yacht Club became such a phenomenon that some massive personalities such as Justin Bieber, Eminem, Serena Williams, Steph Curry, and many more – wear the BAYC brand and own an NFT.

In other words – you need to be very selective and make sure to carefully see what influencers and celebrities stand behind the project (if any). Their reputation is what you should be considering here.

Bluechip projects tend to perform better than others in terms of both volume and price after they hit the open market. Non-fungible tokens are just that – non-fungible. This means that, unlike trading cryptocurrencies, you need to actually find a buyer for your particular NFT –  you can’t just hit the “sell” button and liquidate it.

This means that projects that have good liquidity should be preferred to those that don’t for this exact reason. Getting into a collection with steadily declining volume means that you risk failing in selling your NFTs and being stuck with them until a buyer pops up.

The good thing about transparent NFT marketplaces such as OpenSea is that you can instantly verify if the supply of a certain collection is highly concentrated or diversified.

In general, you would expect for a good project to be backed by a large number of holders. Of course, there’s a caveat here that one person can create multiple ETH addresses and hold more NFTs, but regardless of this – you want to see a decent number of holders, making the entire series less centralized.

In terms of utility, a good way to gauge whether or not a project is worth prior to the mint is to check the roadmap. If it’s already out there, it’s a bit easier because you will have some sort of history to work with – what is the team doing for its NFT holders? Are they standing idly and enjoying the proceeds of the mint, or are they actively developing the project and furthering its use cases?

And while exclusivity alone can be a reason to participate, utility is what might yield longer-term benefits. For example, BAYC holders have so far been massively rewarded by the team who created two additional collections and airdropped them to current holders or allowed them to mint exclusively, thus bringing added value.

In a nutshell – check if you, as a holder, are entitled to something else besides a verifiably non-fungible JPEG.

In terms of copyrights, there’s really no need to be a lawyer, but every NFT collection decides what to allow and restrict when it comes to copyright. Let’s see an example.

The terms and conditions of the Bored Ape Yacht Club reveal that Ape owners are pretty much allowed to do whatever they want with their NFTs so long as they can verify ownership. On the other hand, there are collections that restrict owners to do certain things with their NFTs or are maybe under some sort of a royalty agreement. In any case – this is something that you can easily verify with a little bit of extra digging on the project’s website.

Non-fungible tokens have cemented their place in the cryptocurrency industry in a decisive way, and there’s no doubt that they are here to stay.

However, as the hype boils, scams escalate too. Hopefully, the above tips will be of use when picking up a collection to jump into.

As a disclosure, none of the above should be construed as financial advice. The content hereby provided is for educational and entertainment purposes only. You should always do your own research and never risk more than you can afford to lose.