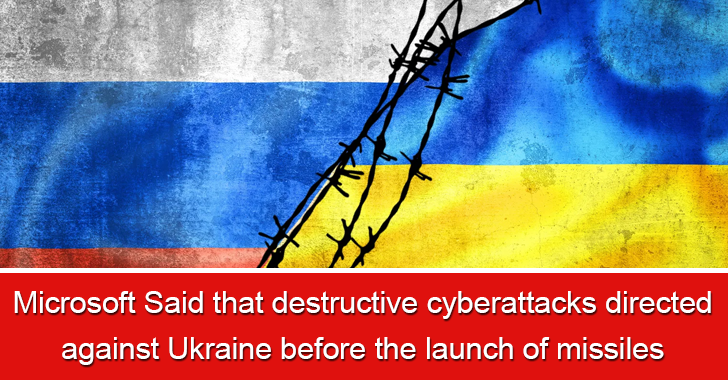 The conflict between Russia and Ukraine is taking severe shape at the moment and Microsoft has recently claimed that destructive cyberattacks and FoxBlade malware were directed against Ukraine before the launch of missiles.

Since the FoxBlade malware was used in a recent attack against Ukraine hours before Russia’s invasion, means that the Russian government was aware of the attack and may have planned it in advance.

In short, it might be possible that the Russian hackers have already planned to use FoxBlade malware as a way to attack Ukraine before the invasion.

“At the outset, it’s important to note that we are a company and not a government or a country.”

In these difficult times, it is important to work together with all the officials and workers in government to ensure that all the ongoing efforts are coordinated closely to achieve all the security measures and common goals.

And for this Microsoft is working closely with the following entities:-

The President and Vice Chairman of Microsoft, Brad Smith stated:-

“Several hours before the launch of missiles or movement of tanks on February 24, we recorded a series of offensive and destructive cyberattacks targeting Ukraine’s digital infrastructure.”

After detecting the offensive and destructive cyberattacks, Microsoft immediately reported this to the Ukrainian government and also shared their identification of the use of a new malware package, FoxBlade, to prevent the cyberattacks.

In short, for countering these cyberattacks the cybersecurity experts at Microsoft has:-

Apart from this, Microsoft’s Threat Intelligence Center (MSTIC) has also shared the target details, and here they are:-

Since the threat actors can exploit the FoxBlade malware to carry out DDoS (distributed denial of service) attacks by using infected computers without the knowledge of the owners.

While Microsoft has affirmed that their primary goal in this situation is to use their technology, skill, and resources for the humanitarian response efforts only.

As a result, the Microsoft Philanthropies and UN Affairs teams are working actively with all the major international security agencies to quickly help and support the people in Ukraine with their resources.

Apart from this Microsoft has stated:-

“We also remain closely focused on support for our employees in the broader region, where we are monitoring the situation closely. As a company, we are always committed to the safe protection of our employees in every country, even when they live on opposite sides of a border marked by conflict.”

The primary goal and call of Microsoft is to:-