Tourism is booming in El Salvador. Since September, when the Bitcoin Law went into effect, it’s up by “more than 30%.” Good news all around, right? But, how did the media react? How did they report on these numbers? We’ll find out after the quotes from Morena Valdez, Minister of Tourism, who told El Salvador in English:

“There are three pillars destined for the development of tourism. The first is infrastructure, the second is to strengthen human resources, and the third is everything related to surf tournaments.”

She also told them that the country received 1.4M visitors, and they were only expecting 1.1M. Also, the “flow of tourist visits” changed. They used to mostly get visitors from Central America, and now 60% of the tourism comes from the U.S.A. “We did a poll to check the activity according to the before and after of Bitcoin. The tourism sector increased in November and December. This increased by more than 30%,” claimed Valdez.

How profitable was the tourism business for El Salvador? “We had projected $800,000 in foreign exchange, but we obtained more than $1,400 million of income in foreign currency,” informed the Minister of Tourism.

How did the media react, though? And we’re not talking about the crypto media.

Even though their article is just a news item, Forbes Centro America’s tone was generally positive. They informed, gave some basic background information on the situation, and got out of there. A quote:

“One of the goals set by the Government is to achieve financial freedom for as many people as possible. In order to move towards that purpose, and as established by law, the institutions join forces to transfer more knowledge on how to take advantage of Bitcoin.”

Are they saying that education is the key? Because El Salvador definitely needs more bitcoin education.

Needless to say, Fortune is a sworn enemy of bitcoin. Their report on El Salvador’s 30% surge in tourism comes with an “it has also brought the country a new set of headaches” and promises “There’s a lot more to the story.” Then, of course, it goes into the usual FUD generating pseudo-news.

According to Fortune, we’re going through a “crypto winter.” The price of the country’s bitcoin reserves is down, the IMF won’t lend El Salvador money, and Finch downgraded their credit ranking. Plus, the Financial Action Task Force is probably going to grey-list El Salvador.They also lie, and say that the Bitcoin Law is “especially hurting El Salvadorans by making remittances more expensive.” That’s a lie, fortune. A blatant lie.

To all of that, we ask: what does it have to do with tourism?

Luckily, we found out the exact reason for Fortune’s beef with bitcoin a long time ago. 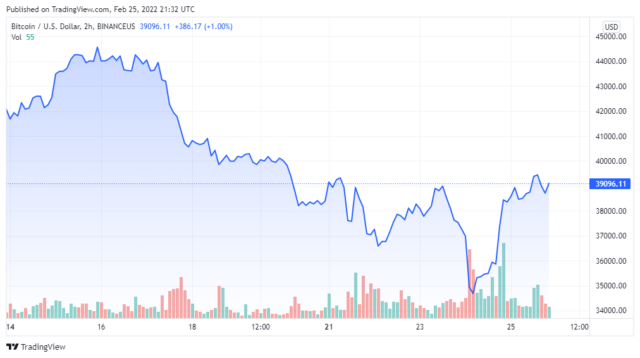 Another brief news item with a positive sentiment. For example, here, Bussines Insider speaks without judgment about an incident that Fortune considers horrible:

“Since the country’s bitcoin adoption, it has moved more aggressively into the cryptocurrency, led by President Nayib Bukele, who has become known for trading bitcoin with government funds on his phone.”

See? It’s not necessary to be incendiary. Or to lie.

The Street Tries To Downplay The Tourism Boom

In their article “El Salvador Has Unexpected Benefit From Bitcoin Adoption,” The Street claims that… Unexpected! Why would they say that? To downplay that tourism is up by 30%, that’s why. Besides that, the article is generally positive, actually:

“Earlier this week, El Salvador President Nayib Bukele took to Twitter to tout the country’s 10.3% gross domestic product growth in 2021 while also saying that exports, which is a main economic growth driver, rose 13% in January.“

And does give us valuable information about the much-needed education we were talking about:

“A technical team from Paxful, a New York-based crypto platform, is running the training program with a goal to “train them to be replicators in their communities and support them in continuing to break the digital divide,” said Fabrizio Mena, Undersecretary of Innovation.”

See what we did there? We made you believe that the media reaction to El Salvador’s increase in tourism was going to be terrible. It was moderate, in fact. Tending to positive, one could argue. Is the wind changing?