Melania Trump has launched three NFT collections. The second one turned on the wash trading alarms as it seems the money for the winning bid came from the NFT creator’s wallet. The Third one tells us more about where this project is going.

Mrs. Trump launched the “POTUS TRUMP NFT” Collection on a different website than hers and only accepted fiat money as a form of payment.

Meanwhile, Mr. Trump regains popularity: launched his glitchy but record-breaking social media platform “Truth Social”; was ordered by ruling to comply with subpoenas and to appear for depositions by investigators, and the cherry on top: just called Putin a “genius” for his latest actions.

Related Reading | Melania Trump Sells Her Own NFT To — Guess Who? — Herself For $170K 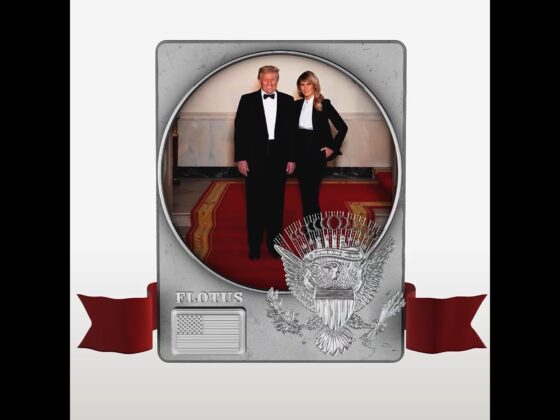 But some people thought they should also mint some like these: 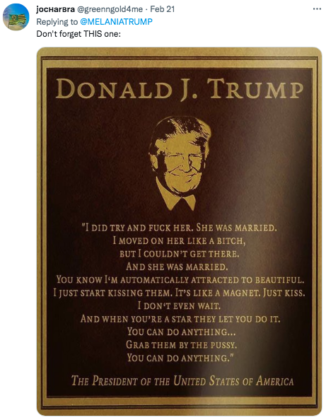 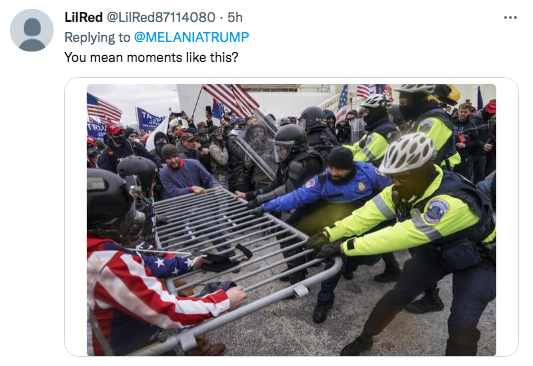 Melania’s previous collections accepted SOL as payment, but after being accused of buying her own NFTs plus the price SOL dropped, the POTUS could only be purchased for $50 with a credit card and fiat currency, although it was be minted on the Solana blockchain.

Worried about the nature of Blockchain protocol being “entirely transparent” now?

Amongst the Trumps’ “bad press”, a New York Times report might have slammed the hardest.

Noting details on how Trump has managed to profit from his position in power, they pointed out that he “has found a big new market for lower-priced goods like hats, T-shirts and books.” As well as bigger-scale projects and Melania’s NFTs.

Proofs or not, Melania has denied it all and called the press “dream killers.” 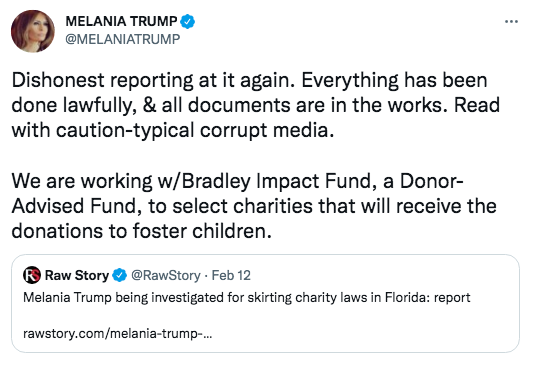 Afterward, she quickly “clarified” –or changed the narrative– that she does not run a charity and the non-profit organization Gen Justice would receive the funds.

But the computer science school that she was aimed to contribute to with the initiative rejected the donation, a move she called “politically motivated.”

Back in 2018, The Washington Post reported that the Trump presidency could be “on track to becoming the most corrupt in U.S. history” and rounded up several allegations up to that point.

It’s 2022 and new corruption claims are not looking any better. However, he could still be reelected in 2024 as his popularity regains strength and Biden’s administration mostly gains complaints.

Maybe the main concern should not be how the Trump family is turning his presidency into profit but what this reveals: Trump is an expert at exploding American fanatism and consumerism and turning it into a political tool. His fans are not only buying red hats and digital collectibles but his ideas.

Today, Trump talked about Putin declaring a big portion of Ukraine as independent, most likely with the purpose of invading. An event that could turn into Europe’s largest war since WWII. Trump said “This is genius.”

In 2016, Trump was investigated for possibly conspiring with Russian to interfere in the election. He also allegedly tried to extort Ukrania’s president President Volodymyr Zelensky by offering $250M if he launched a corruption investigation on Joe Biden and his son.

While Republicans and Democrats have their catfights and use whatever tool they can find to regain popularity. Politicians are racing to use crypto as a way to gain votes.

As the world’s latest events are making the case for why we need Bitcoin, one should also wonder where democracy truly lies.

Save Thousands In Taxes by Harvesting NFT Losses